Obviously, not the way the Brewers have played the last 2 games in Chicago. That’s not worthy of anything but frustration. And to be fair, Randy Wolf pitched great Monday but fell victim to lack of offense. And Yovani Gallardo pitched great last night but fell victim to a shoddy bullpen. So there’s a little to celebrate. I guess. But that’s not why.
No, no. Tonight we celebrate the return of George Kottaras.
Yay!
I’ve always been a proponent of George. And his Greek-ness. And his beard. (Ohhh, the beard!)
And it’s funny because last season, I was George’s only fan. I had his name and number put on the back of a shirt and was literally laughed at by the guy at the sporting goods store. I didn’t care how much crap people gave me for liking George, I loved him no matter what.
And now it seems that his imminent return was called upon by the thousands of Wil Nieves haters out there. (And due to the fact that Nieves produced nothing offensively, hating is totally warranted.) If you’re only gonna like George because he’s not Wil, well then…no. That’s cool. I’ll take it.
Yay George! 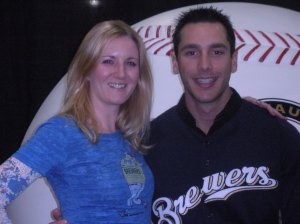 No, I never get sick of this picture.

And who knows if the Brewers will even play tonight, but here’s the probables if the monsoon in Chicago ever lets up.
Narv Dog (3-4, 4.32 ERA) is coming off his best start of the season, blanking the Cardinals for 8 innings. He also pitched well the last time he faced the Cubs, going 7 scoreless innings and striking out 9 in a 6-0 shut-out. Narv will have to battle it out with Carlos Zambrano (5-3, 4.40 ERA), who likes to beat up on Milwaukee hitters. He’s 13-8 against the Brewers for his career. Boo.
Go Brewers!