That’s right. Three homeruns. In one game. And there were guys on base every time, too. A miracle, you say? Nah. Just a quick tweak to the stance in the cages before the game. So 7 RBIs later (oh, and 4 others not of his doing) Hart handed Yovani Gallardo his 4th straight win and the Brewers extended their winning streak to 4, all the while pushing towards the top of the standings in the NL Central.

Tim Dillard made his first appearance for the Crew in the 9th and let the Nationals have a couple mercy runs. You know, just so they wouldn’t feel so bad.

Assuming the sweep in DC back in April was a fluke, I’m sure the Brewers will be more than happy to return the favor this week. Tonight’s game matches up lefty Chris Narveson (2-3, 3.44) with right-hander Livan Hernandez (3-6, 3.64). Hernandez held the Brewers to 1 run the last time out and he pitches well against Milwaukee, but the Narv Dog had been nothing short of outstanding lately and has already given the Crew 3 starts with at least 6 scoreless innings. I’m just guessing the Brewers pretty much have this series in the bag.

So onto the more pressing Brewers-related story: Where’s Bernie?

Apparently, he’s spread through a small number of households in Wisconsin, waiting to be purchased on eBay.

Sadly, the promotion that should have been a fun, family-friendly scavenger hunt throughout parks all over the state was actually a pretty big bust for the Brewers organization.

Since the promotion played out @Bernie_Brewer and #WHERESBERNIE the past week, I’m assuming most of the accounts of the event I read on Twitter today were pretty accurate.

Yes, all of the Bernie Brewers were found and most folks probably had a good time looking for them. However, a handful of greedy “fans” ruined the fun and games by staking out parks, sneaking Bernies much earlier than the 5am designated start time and hoarding dozens of statues, which surprisingly started popping up on eBay a short time later.

One brazen lady decided to post pictures of her haul to Twitter. Not a smart idea, @erinann1511. Not smart at all. (I hear she’s since deleted the account.) 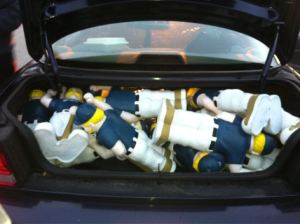 "I hope you have a big trunk 'cause I'm puttin' my Bernies in it!"

So I hope the Brewers learned their lesson with this one. I also hope they plan on doing something similar again because it did seem like it would’ve been a good time. Just maybe plan it out a little bit better, maybe?

And it’s a shame that the few Bernies that were available to purchase at the Team Store are sold out. Looks like the selfish (I’m guessing adult?) so-called Brewers fans will actually be making money off their inability to possess common courtesy or follow rules.

But honestly, the thing is pretty creepy looking and I didn’t really want one anyway.