Opening Day and I only caught parts of 2 games. Sad. Then, I only saw some of Baseball Tonight with the sound off while the NCAA Championship was on at Leff’s. I would’ve rather watched baseball all night.

But, I must congratulate Mol for winning her first bracket ever! She picked UNC. Nice.

So, anyway, this will only be a quick recap of what I saw and then my picture for the day. I will not recount stats, as I wasn’t able to pay too much attention, but at least the 2 games that I did see most of were the 2 I wanted to see.

First up, Yankees-Orioles. I wanted to see CC Sabathia pitch his first game in Yankee pinstripes, and, as I thought he would, he faltered. Sabathia allowed 5 runs in less than 5 innings and was tapped for the 10-6 loss. Now, it’s definitely not an “I told you so” type of situtation, seeing as it was only the first game of the season, but it was a pretty rough outing. At least this time he’s got 7 years to prove himself.

The next game I caught was Cubs-Astros. The Cubs got off to a good start with a 1st inning HR from Alfonso Soriano. They were up 4-0 in the 9th, when a too little, too late Astros rally only managed 2 runs and the Cubs came out on top, giving Carlos Zambrano his first Opening Day win.

Tomorrow the Brewers take on the Giants, Suppan vs. Lincecum. Yikes. Like I said yesterday, I wouldn’t be surprised to see San Francisco take Game 1, but I think the Brewers will wind up with the series win.

Today’s picture comes from CCs first game in a Brewers uniform. Unlike his game today, the Brewers won and CC would go on to be one of the best things to happen to Milwaukee in 26 years. Even if he was only here for a few short months. I will always remember this game because of CC, the Ryan Braun tshirt and the unbearable stench at Miller Park due to the 80+ degree July night. Awesome. 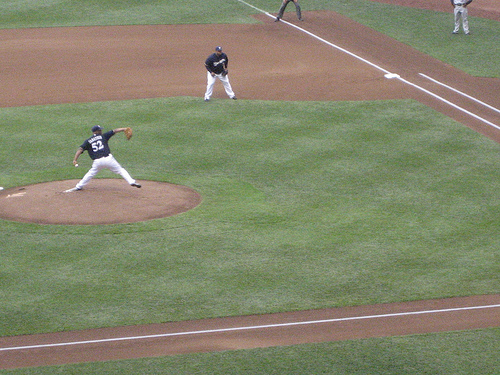